So, I clicked on the “inspire me” button, and this is what it came up with.

Take a line from a song that you love or connect with. Now forget the song, and turn that line into the title or inspiration for your post.

Well, I can’t just forget the song. I mean, once you’ve got a song stuck in your head, it’s stuck. So, I’m going to subject all of you to it too.

Now, as to how to relate it to children’s literature, well, let’s see….

There are several ways that children pretend. They may play dress-up, or play ‘doctor’ or ‘house’ in which they take on the roles of people in a family setting. These pretend games are very important to a child’s development. Through their imagination, they mimic the structure which they are familiar with in the “real world” or they change it so they have more agency. “It is generally acknowledged that children are in need of play and that if they are deprived of play, disastrous consequences may ensue. Thus, a central concern for human rights activists over the past two hundred years has been to ensure, through employment and other legislation, that children are entitled to leisure time. Indeed, Article 31 of the U.N. Convention on the Rights of the Child gives children “the right . . . to rest and leisure, to engage in play and recreational activities appropriate to the age of the child and to participate freely in cultural life and the arts.”… Play is a spontaneous expression of imaginative life.” (Holt, 34)

There is a picture of one of the “Wild things” on the wall behind Max and the dog.

In Where the Wild Things are, Max, after being sent to his room and called a “wild thing,” (Sendak, 5) by his mother; becomes “king of all wild things” (Sendak, 21) in his bedroom-forest. Through his imagination, Max can change the scolding he receives from his mother into a position of power. Although the wild things “were frightened and called him the most wild thing of all” (Sendak, 20)  they beg him “Please don’t go- we’ll eat you up-we love you so!” (Sendak, 30) The term of wild thing has been refashioned to be positive, not negative. It also helps to explain, that “within safe limits, our imaginative play can give us enjoyment. That we do have control over its effects upon others, and those effects can be enjoyable to others. That we know what is imagined and what is real, and can return whenever we choose to the real.” (Glasser) He is not sent to his room for pretending, but for doing so at an inappropriate time. Once he lets his imagination take over in his room, it is acceptable. 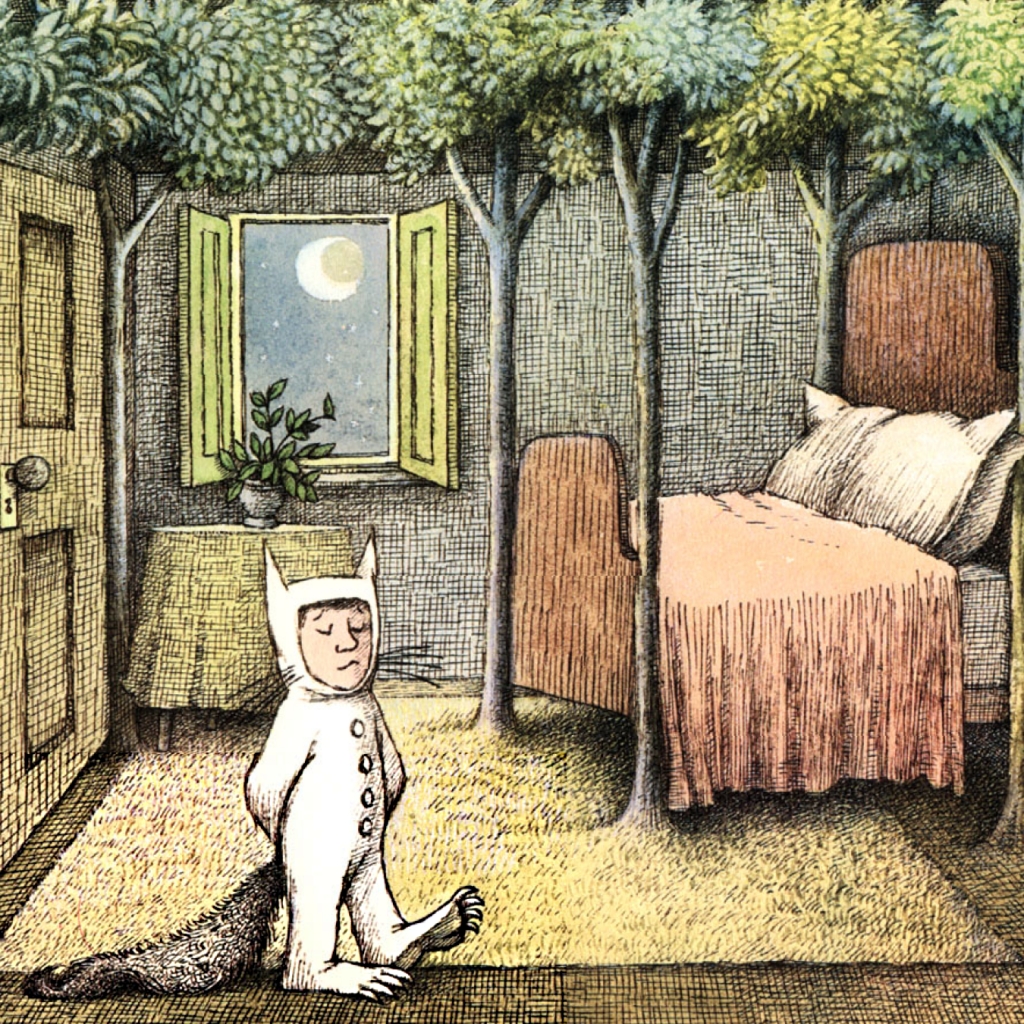 His room grows into a forest, His imagination is taking over. His expression is the same one he has as “King of the Wild Things”

Jacob Two-Two “had two older sisters, Emma and Marfa, and two older brothers, Daniel and Noah.” (Richler, 1) He is the youngest at home. “On bad days, he saw that all the other children in the house were taller and much more capable than he was.” (Richler, 1) As he tries to find his place in his family, his siblings go to extreme lengths to scare him into staying away. “‘Look,’ said Marfa, pointing at the wrestler on the screen, ‘That’s the Hooded Fang, and he’s going to jump out of the TV set any minute and chew you to bits.'” (Richler, 4) When he is given independence, his warning from his sister makes him nervous. “Emma had warned him that Mr. Cooper, the greengrocer, was two-faced. He was nice to children as long as their parents were with them. He pinched their cheeks and offered them grapes. But if a child came into his shop alone, he made him wait until all the big people had been served.” (Richler, 7) Jacob takes his siblings’ words, used to try to frighten him, and makes sense of them through his dream. He takes Mr. Cooper, and transforms him into the Judge and the Hooded Fang. While in the grocer’s, “Mr. Cooper stamped his foot… ‘I demand justice. This exasperating little boy,’ he insisted, ‘must be charged with insulting behaviour to a big person.’ The policeman, holding back his laughter took a step toward Jacob Two-Two.” (Richler, 9) He is instead, reduced to  hiding from children himself. “Shapiro, followed by O-Toole, traversed the court room…dropping to the floor immediately before the trembling Mr. Justice Rough. ‘I-I-I-I,’ began Mr. Justice Rough, ‘a-a-am a grandfather myself. I a-a-a-adore children, beautiful little people. Have a gumdrop?'” (Richler, 23-24) As well, the laughing policeman, a symbol of authority for Jacob, and scares Jacob so much that he runs off, becomes useless in the courtroom. “Immediately, the two burliest policemen in court fainted.” (Richler, 23) With his imagination he can make sense of the grocer and the policeman, and see them as humans. Even if they were made frightening by his siblings, he breaks down the binary of good/bad through his dream. Scorned for being “too little to help anybody.” (Richler, 5) he imagines that he is the only one who can help in his dream.”‘Child Power needs your help,’ said Shapiro…’You must help us uncover the hidden children’s prison…and rescue all the poor wretches being held there'” (Richler, 26) They have faith in him in his imagination, and trust him even though “So much depended on a boy who was still very little.” (Richler, 77). As the Hooded Fang tries to scare Jacob Jacob mirrors him. “The Hooded Fang bared his sharp, terrifying fangs. He growled. He grunted. He rolled his eyes. He leaped up and down. But Jacob Two-Two didn’t tremble. Neither did he cower. Instead, he leapt up and down, growled, grunted, and rolled his eyes right back.” (Richler, 67-68) The image of the Hooded Fang which Marfa presented Jacob with is not frightening, but silly as Jacob imitates him. He has taken a character which was supposed to be frightening and instead humanized him. “The Hooded Fang is childish. He’s one of us.” (Richler, 81) he says, and in reaction “The Hooded Fang burst into tears. ‘I want my mommy, he wailed.” (Richler, 82) He uses his imagination to recreate himself and others. He recreates his siblings as heros and friends who accept him. “After Jacob Two-Two had climbed into bed, he was paid a visit by the fearless O’Toole, accompanied by the intrepid Shapiro. They brought him a Child Power uniform that was different from all the others. It contained a pair of Day-Glo blue jeans and a golden cape, but the Child Power emblem was emblazoned on the T-shirt two times.” (Richler, 85) He is reshaped, not through his family, but through himself. The things which caused others to find him irritating are what make him an individual.

The books fly off the table, and the judge uses the gavel to wake the jurors up, not to alert them of the sentence that has passed.

The use of one’s imagination is important in children’s literature, as children can express their thoughts, feelings, and work through their identities. However, it is worth noting that to do these things, they have to retreat into internal dialogue to do so. “Characterizations of creative children or their fictional representatives abound in children’s literature. By allowing their protagonists to act out fantasies—either in dreams or waking-many works encourage children to believe in their own creativity and in the safety of expressing it. However, there are also children’s books which, while appearing to offer such encouragement, actually foster the idea that the child’s creative capacities should be selectively restrained.” (Glasser) There are two sides to every story; while the use of imagination shows children that they can have agency, it also reminds them to do so sparingly.

I believe that Spongebob described it best.”With imagination, I can be anything I want!” However, “Terms such as “imagination” and “creativity” have been so thoroughly co-opted by our overmediated culture that they have become virtually meaningless. At the very least they are subjects that are almost impossible for critics to invoke without irony or even sarcasm. “Imagination” and “creativity” are most often employed as marketing terms in late-capitalist culture (Disney has an “Imagination! Pavilion” at Epcot). They are marked as “childlike” in the escapist sense—a retreat from the world of maturity. But rescued from the corporate context and reframed as the human capacity for discovery and generative play, they may still describe desirable aims: we still wish to encourage children to be imaginative and creative, to be actively engaged with making meaning in the world rather than becoming passive consumers.” (Flynn) The use of imagination has become something to be laughed at and made fun of; and the only place where pretending is acceptable is in children’s stories and shows. With imagination being relegated to the “child world” it is dismissed.

As “King of the Wild Things” Max has the same facial expression as he does when sent to his room. His title as a “wild thing” is something to be praised in his imagination, and it is okay to do what he wants.

IMAGES: (In order of appearance, everything else in alphabetical order.)

What’s on my mind

You’re writing about WHAT?